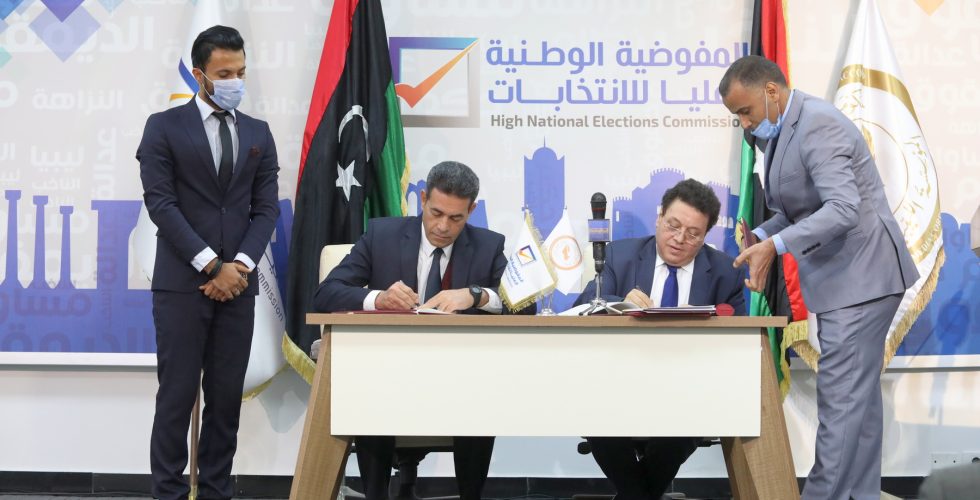 The High National Elections Commission signed today, Thursday, December 31, 2020, a Memorandum of Understanding with the Libyan Media Corporation, as part of the efforts of the two parties to raise the levels of political and electoral awareness, and to activate the role of the media as a key partner to support the democratic path in Libya.

This came in the midst of an official ceremony attended by members of the Board of Commissioners, Mr. Abdul Hakim Al-Chaab and Mr. Abu Bakir Marda, in addition to the Director General of the Commission, Dr. Yahya Al-Jadid, and the Heads of departments of the Commission and the Libyan Media Corporation, and representatives of local and international media organizations.

In his speech delivered during the signing ceremony, the Chairperson of the Commission emphasized the importance of this partnership in promoting the electoral process and raising national awareness to support effective political participation, noting that, this memorandum will enter into effect starting from the beginning of 2021, through which the two sides will begin to exchange experiences and work on the development of  media and awareness processes within the Commission in a way that guarantees the safe delivery of information in an official framework without misleading or distortion, as well as re-activating the Media Observatory, especially with the imminent implementation of the upcoming  electoral events.

For his part, Mr. Baiyou expressed his appreciation for the steps taken by the Commission to support ways of communication with the Libyan Media Corporation, noting in his speech that, the memorandum “aims to promote national awareness towards elections in which the Libyan people exercise their basic right to choose those who represent and serve them.”

The High National Elections Commission had previously announced its intention to open channels of communication with all its main partners and intensify its awareness-raising efforts in preparation for the implementation of the expected electoral elections on December 24th, 2021.