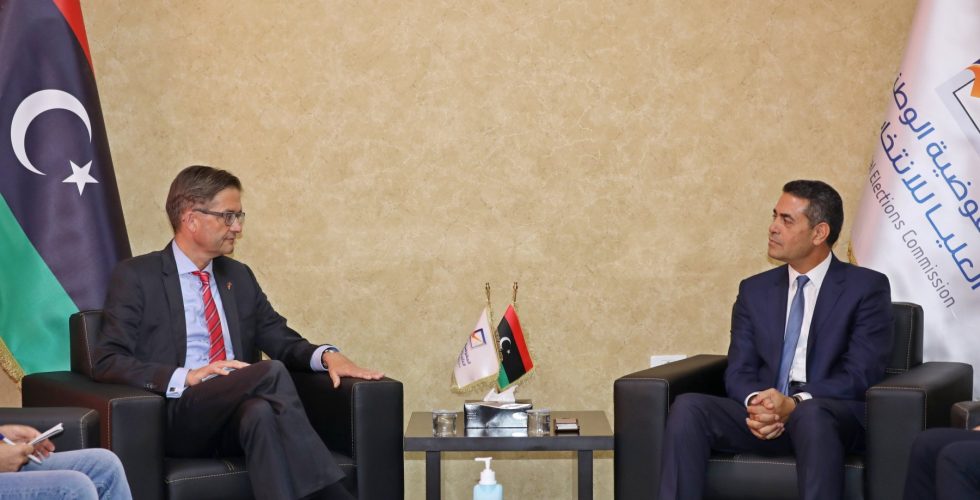 The Chairman of The High National Elections Commission, Dr. Emad Al-Sayah, has received today morning, Sunday, August 16th, 2020, the Ambassador of the Federal Republic of Germany to Libya, Mr. Oliver Owcza, and his accompanying delegation at HNEC Secretariat, in the presence of HNEC Board member Abdulhakim Belkheir.

This visit comes within the framework of the international community’s support for the democratic process in Libya, to check the readiness of HNEC to implement any electoral process approved by any prospective political settlement. 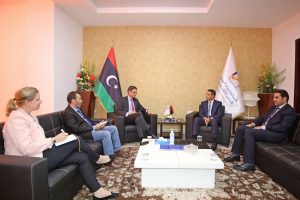 At the beginning of the meeting, Dr. Emad Al-Sayah expressed his thanks and appreciation to the German government for its political efforts aiming at achieving stability in Libya. He talked about the challenges facing the Commission and the extent of its ability to continue performing its duties in light of the current circumstances in the country. During the meeting, they discussed the effectiveness and efficiency of the international support supervised by the United Nations Support Mission in Libya, providing international expertise and electoral technology.

Form his part, the German Ambassador praised the efforts made by the Commission and the level of preparations, getting ready to cope with any political agreement that leads to elections, and he expressed his country’s readiness to establish and support the democratic path in Libya.

It is worth noting that the Berlin conference, which was sponsored by the German Government, including representatives of 16 countries, encouraged the Libyan actors, in its recommendations, point 26, to resume the comprehensive political process led and owned by Libya, and to engage in it in a constructive manner, paving the way to end the transitional period through free, impartial, inclusive and credible Parliamentary and Presidential elections, organized by an independent and effective High National Elections Commission.