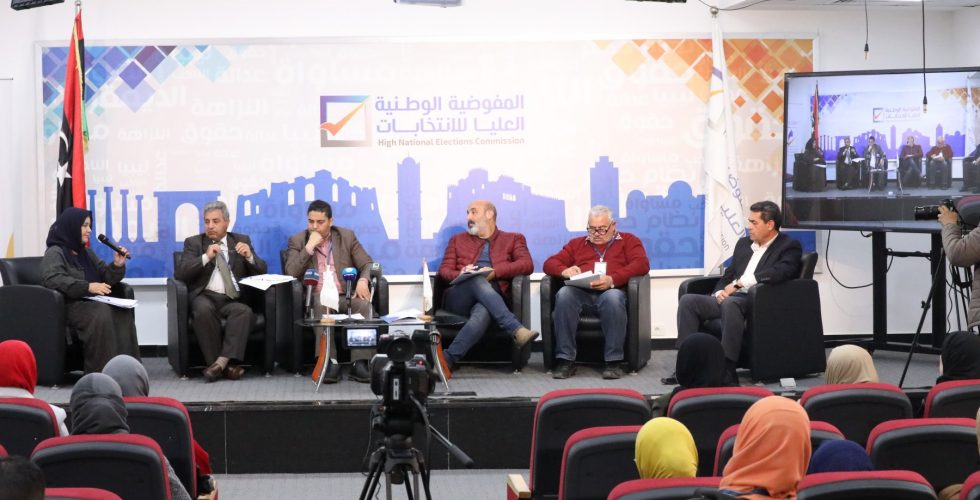 The Women Support Unit of the HNEC organized a dialogue session titled “Media Participation and its Role in Electoral Awareness for Women” on Wednesday, February 26th, 2020, in the presence of Dr. Emad El- Sayeh, the Chairman of HNEC Board, Mrs. Rabab Halab, HNEC Board member, and representatives from different media outlets, in addition to an elite of academics, some independent journalists, and a number of media representatives of government institutions, besides some Heads of Departments and Offices and some staff of the HNEC.

The meeting, which was held at the HNEC HQ, was opened by a speech of Dr. El-Sayah, the Chairman of the HNEC Board, during which he expressed his gratitude to the participants who responded to the invitation by attending and contributing to the dialogue; praising the qualitative presence of media female representatives. During his speech, he also highlighted the role of the media as the fourth authority, influencing the outcomes of the electoral process, saying: “looking at the statistics, the participation of women in the voters’ registration process was high, however, the number of female voters decreases during the polling day, that is why it is important to discuss how the media can increase women turnout during elections.” Dr. Emad added: the media has significant responsibility of educating women about the phenomenon of “influenced vote” and its impact on the independence of women’s choices during the voting process.

The session witnessed also interventions of some academics in the media field, such as Mr. Khaled Ghulam, a teaching staff member of the School of Arts and Media of Tripoli University, who discussed the importance of communication between the HNEC and media faculties, and the need to utilize press polls and reports in discussions about issues and challenges facing women’s participation in elections. The independent journalist and expert in the field of media Mr. Younes Al-fennadi, discussed the issue of enhancing confidence in the role of women, supporting them in order to depend on themselves and their abilities, in view of the obstacles of the current stage, besides, the importance of media capacity building to create professional media cadres in the field of elections. The journalist, Mrs. Rabia Habas, also discussed the conceptual aspect of the electoral process and its importance for media representatives, to provide accurate informative materials that serve the objectives of the electoral process.

Further, the points presented by Mr. Mustafa Al-Ferjani, the Head of the Public Outreach Department of the HNEC, and the facilitator of this session, had extensive discussions and various opinions regarding the expected role of the media and women participation in elections as an indicator of social justice, and addressed the most significant obstacles to women’s participation in the electoral process and ways

For her part, the Head of Women Support Unit of the HNEC, Mrs. Enas Al-Tuwaini, presented a closing paper summarizing the recommendations of the session, and praising the level of positive interaction that characterized the participants contributions, confirming that the Women Support Unit is in the process of implementing the 2020 annual work plan, through which it seeks to cooperate with partners to achieve effective participation of Libyan women in any electoral process.